Bookings are essential as space is limited!

Map to the Briars

The Victorian Astronomy Convention, VASTROC, is a biennial conference for all amateur Astronomers in Victoria. It is hosted in odd years by the different astronomical societies around the State.

MPAS is excited once again to be hosting VASTROC, with 2019 being the 17th since its inception.

The next is set for the weekend of August 10th 2019, aligning with the 50th Anniversary year of MPAS and National Science Week.
It will be held at the regional Briars Astronomical Observatory and surrounding facilities in Mount Martha.

This event will be open not only to members of astronomy groups, but also to other community groups with common interests and, indeed, to all members of the public with a fascination about the Universe. This year MPAS's successful Astrophotography Workshop will be run in conjunction with this event.

The convention will contain workshops, talks, displays and interactive forums in a social atmosphere.
Its broad theme will be the Moon (with recent 50 year anniversary of the Moon landing), and all things Apollo will be encouraged and celebrated.

Please note : This itinerary is subject to change.

Ian Sullivan : ORION AND THE PYRAMiDS

We all know the belt of the constellation ORION is not straight. The star Mintaka does not line up with the other two - as do the main pyramids at Giza in Egypt. Is it coincidence or a planned project ? Several books have been written in recent times with theories and questions . My program includes history of the Egyptians and their gods, and work of the modern experts on the ground willing to look up at the stars and learn some astronomy.

Since 1922 it has been realized that both stars in galaxies and galaxies in galaxy super-clusters revolve around their central black holes at velocities faster than predicted by Newton's gravity law.
This was explained as being due to an as yet unidentified very heavy collection of. "Dark Matter" wrapped as a halo surrounding each galaxy and each galaxy super-cluster.
At first it was thought that this Dark Matter would be normal Massive Condensed Halo Object or MACHO. However, after thousands of telescopic searches for many different normal objects not enough have been found!?
So now the search is on in deep underground labs for Weakly Interacting Massive ParticleS or WIMPS Since 1990 other astronomers claim to have found evidence that the expansion of the universe has been accelerating for the last 6 billion years due to the repulsive negative gravitational "Dark Energy".
There are many theories explaining this mystery but the simplest is to assume that it was an initial part of creation called the "Cosmological Constant".
At present all modern Dream Time Stories or Cosmologies assume the existence of both Cold Dark Matter and the Cosmological Constant.

When did amateur astronomy start? Certainly "look-see" astronomy has been around for as long as intelligent hominids have been on the planet, anywhere between 2 - 20 million years and it is still alive and well today. We know that Neanderthal humans were aware of the sky some 800,000 years ago and very likely had a mythology to complement their understanding of the world as they saw it. I can image Neanderthal humans sitting around the campfire exchanging mythological stories much as the Australian's first people did 30,000 years ago.

Before 1800AD amateur astronomy did not exist. People who did astronomy were known natural philosopher. They were interested in understanding how things worked based upon religious, theological mythology. During the mid-seventh century people started to question the difference between revealed truth and truth based upon experience. The Royal Society was founded in 1660 on the principle that knowledge based upon experimental results was the only source of true knowledge. During the period 1800 to 1834 professional astronomy was devised, invented, created and amateur astronomy devolved as the result. Today amateur astronomy has completely devolved away from science and returned to its roots as "Look-See" stargazing using high-tech instrumentation.

Today the future of amateur astronomy is murky and knowledge has degenerated into what can only be found on the Internet rather than through personal exploration.

This paper will explore this history using the life of William Hershel as a model of modern amateur astronomy.

Brad Tucker : The Universe and the Future of Space

In the past few decades, rapid progress in technology has led to a complete change in our view of the Universe. In the next few decades, this will change even more as we become an inter-planetary species. Dr Brad Tucker will talk about some of these discoveries, from planets around other stars, to exploring the Universe and maybe even visiting other planets, and show we are now turning science fiction into reality. 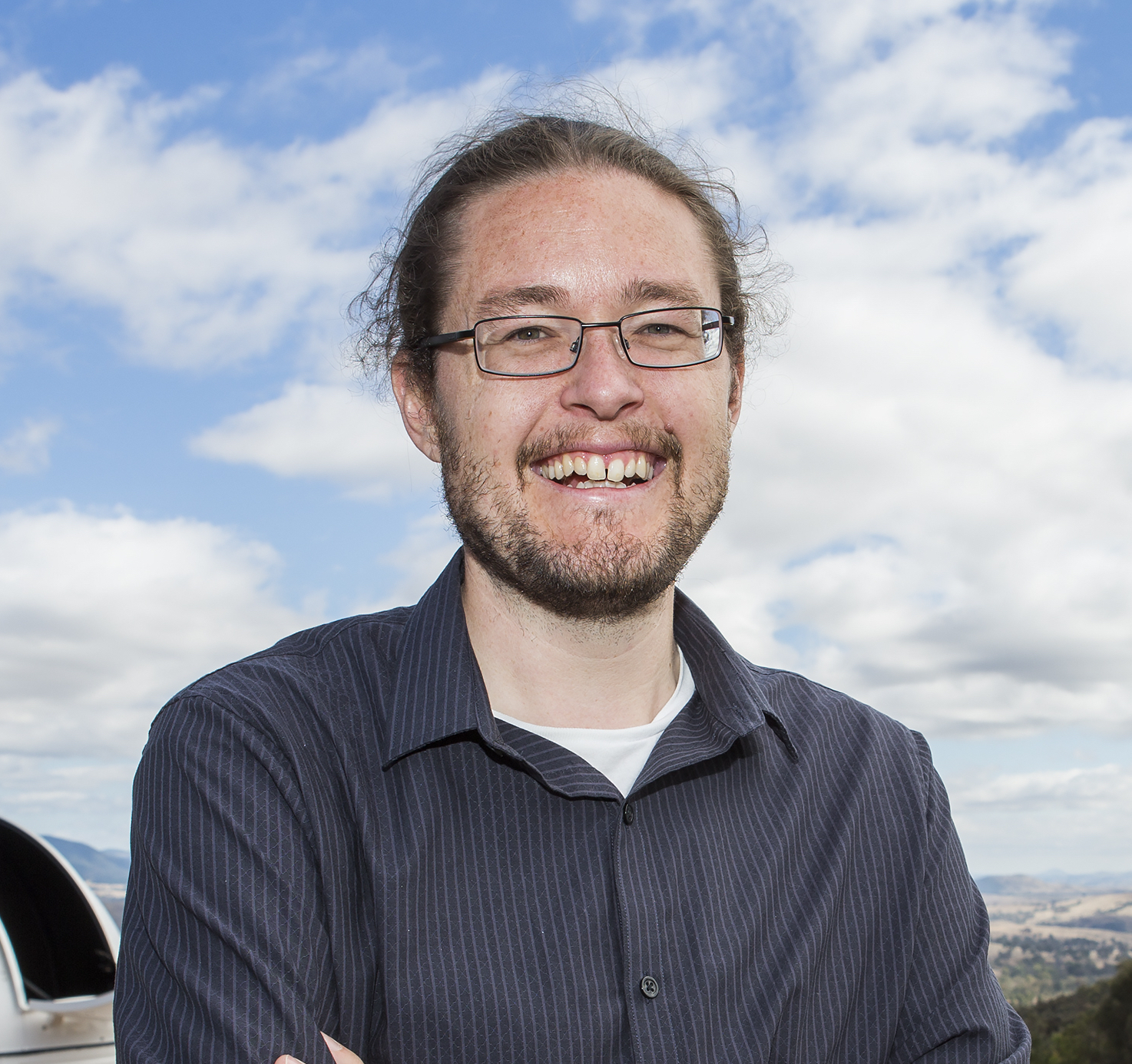 Dr Brad Tuckeris an Astrophysicist/Cosmologist, and currently a Research Fellow at the Research School of Astronomy and Astrophysics, Mt. Stromlo Observatory and the National Centre for the Public Awareness of Science at ANU. Brad received Bachelor's degrees in Physics, Philosophy, and Theology from the University of Notre Dame. He then undertook a PhD at Mt. Stromlo Observatory at the Australian National University. He is currently working on projects trying to discover the true nature of dark energy, the mysterious substance causing the accelerating expansion of the Universe, which makes up 70% of the Universe. He's one of the leads of the Kepler Extra-Galactic Survey, a Kepler Space Telescope Key Program, to understand why and how stars blow up. He is also leading a project to build a network of ultraviolet telescopes in the upper atmosphere, which are being built at Mt. Stromlo, a search to find Planet 9 - a hypothetical new planet on the edges of our Solar System, as well as a new mission to capture and mine an asteroid.